“We recognize that it’s spaciousness that truly enables us to respond, rather than react to any given situation.” 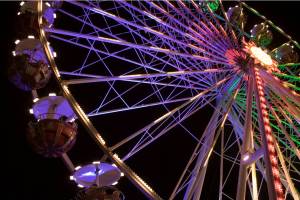 If you could add up all the times you’ve reacted to today’s events, and the amount of times that you actually responded to them, would those numbers be out of balance? To which side would the scale tip for you? Contemplating this rather important image, the question arises, “How do I actually get to choose to respond to situations that happen in my life, rather than just react to them?

Presented to simply stimulate thinking, please pardon the oversimplification made in the following paragraphs. To begin with, let me suggest the major difference between reacting and responding.

When you respond, you meet the surprise and wonder of life as it arises, finding out what instructions life has for you, rather than what instructions you have for managing your life. Reacting just pushes ahead one’s own perceived agenda but does not allow for very much discovery. Since everything is impermanent (meaning all arises and all eventually falls away,) when we attempt to grasp onto things, or in other words, to control life, we ultimately wind up being frustrated–thus suffering. Any attempt to illlicit control over the events surrounding us is futile, and if thought not so, will only lead to more reacting, thus the more suffering.

Barring the “flight or fight” experience; we might say with assurance that reaction = suffering because, at its core, reacting is an emotional experience. Plain and simple, when we react, we see ourselves standing arm and arm with some kind of pain.

This image came to mind when meditating on reacting or responding: You are present at the local county fair as you approach the Ferris wheel. You have a choice to purchase a ticket for the ride, or maybe not. If you go for the ride, you hand over your ticket to the operator and sit down into one of the boxes and get locked in tight!

Remember, the ride is controlled by another person who, at his or her decision, moves you up one side and down the other. Fast or slow, round and round you go!

Another choice might simply be to stand beside the wheel, perhaps at its fulcrum and witness the ride occurring. If you watch it operate, you beget information about how the inner workings of the wheel turns by watching all the belts as they move in relation to the motor. You’re able to see all the different expressions on the people in each individual box as they circle around and around and you get to see the operator who’s at the control. Either way, on or off the ride, you’re still having an experience.

When you’re on the ride, your perspective is a rather limited one since you are being entertained in captivity while spinning–going high then low, backwards or forward. While standing and watching the ride; however, you’re able to get most of the same information with your feet firmly on the ground.

So too is the choice of reacting to any situation, or responding to it. Neither negates all the potential for emotions that could be experienced, they’re just experienced differently. As the rider, you are bound to the experience and not in control. You have no choices. Watching the ride; contrarily, there is no attachment to it (remember, your feet are on the ground) but you still can laugh, you can still get dizzy and you can still get scared just seeing the Ferris Wheel turn, stop, and go backwards.

This example may seem silly to some, but it provides an important simile; if we are able to be a witness to, and thus put space between the actions that happen around us, then we are able to consciously decide to create a response to them, or decide… maybe not. It really is our ability to recognize that it’s spaciousness that truly enables us to respond, rather than react to any given situation.

If we take the time and breathe between actions from our environment (including the people in it,) and also the actions that will emanate from ourselves, we find a whole lot more potential of possibilities.

The spaciousness is there, it just needs to be cultivated in the mind, and practicing meditation is an excellent way to begin to provide for this “space of allowance” sometimes referred to as Mindfulness.

Two monks were casually walking by a stream. As they passed, a woman standing at its waters edge was struggling to get across. She asked softly if one of them could help her complete her mission (Buddhist Monks, you may know, are not suppose to touch anyone of the opposite sex.) One of the two, without much thought, went to her side. He lifted her up and with great care, carried her on his back across the river safely to the other side. After accomplishing his mission, she thanked him and went on her way. Upon returning to the other side to join his fellow monk, he noticed his friend shot him a stern glaring look, but without comment, they continued their walk, in silence.
About an hour later, the monk turned to his friend and said, “You know, that was inappropriate for you to do–carrying that woman across the river back there.” His friend, smiled rapidly to the Monk holding question, and gently put his hand upon his friends shoulder to stop their walk. Peering into his eyes, he replied, “My dear friend, I carried that woman across the river and put her down well over an hour ago; however, since then, I see you are still carrying her on your back. Let us rest a while, you must be exhausted!

I enjoy this story very much, because to me, it exposes with simplicity the multiple layers in reference to the topic of judgment while demonstrating the enormity of potential difficulty we (conscious or otherwise) incur when we judge others. Unknowingly, we ultimately wind up carrying their doings on our backs for as long as we hold onto whatever particular judgment (for whatever reasons) we’re attached to.

Observe how this may relate to yourself in the present moment with someone you work with. Perhaps with your partner or maybe consider how it demonstrated in a recent past situation. It doesn’t take long to realize that all of us carry around a lot of judgments about other individuals we know and many we don’t (how about the guy who cut you off on the freeway yesterday!) Similarly, political organizations, social groups and even inanimate objects are a “bulls eye” for us to fire the arrow of judgment at. When you think about it in this way, we just become more easily aware of how ominous the load can be!

But before we even approach the easiest target for this introspective exercise (the enormity of “how we judge ourselves,”) let’s look at how we viewed and continue to view, our parents. More precisely, ask the question of: are we holding onto judgments about how they did or didn’t perform they’re specific roles as Mom and Dad?

Most psychotherapists put this item in the top 5 as potential watersheds during therapy–and refer to this as a patients necessary exercise for the transcendence of consciousness in their process of healing. When appropriate, walking through this issue can unfortunately be painful, but at the same time, it can be extremely liberating. As Albert Einstein said, “In the middle of difficulty lies opportunity!”

A quick for instance: A woman I know was never able to cognicize (cognate and recognize) that she was schlepping around a heavy loaded “blame game” about her parents that in particular, had to do with her sexuality. She was in fact, an unhappy, angry Lesbian. Angry that she didn’t wind up like her sisters: “familied” and living the “American Dream” THAT she felt, left her out in the cold.
The stress and anger she unconsciously had toward her parents got acted out with almost everyone she encountered. Those who she allowed into her life (to be close with) were stricken with the weight of her pain and suffering in a multitude of unhealthy ways until finally, she was able to cross the river, put the load down, and release the chains that bound her.

Having the realization in therapy and then the ability to embrace the idea that her Mom and Dad did the best they could with the resources they had at that time, allowed her to finally release the bundles of blame-issues she had been carrying around most of her young adult life. She realized that this simple (albeit deep) judgment, held in the back of her mind, was preventing her from experiencing many of life’s delights (not unlike the monk who was holding onto his judgment for an hour.)

The very simple story and this real life example, shines a beam of light on a complex psychological issue that sometimes can evolve into becoming a vicious psychosis: that we all participate (at some level) in “demonizing with blame” those who raised us. However, when we begin to sit and take a breath, and give ourselves the time to watch how our mind really works, we then, and only then, are able to allow ourselves to receive the gift of unloading the heavy judgments we’ve been carrying around…making our own lives less burdensome and as a result, more joyous and loving.